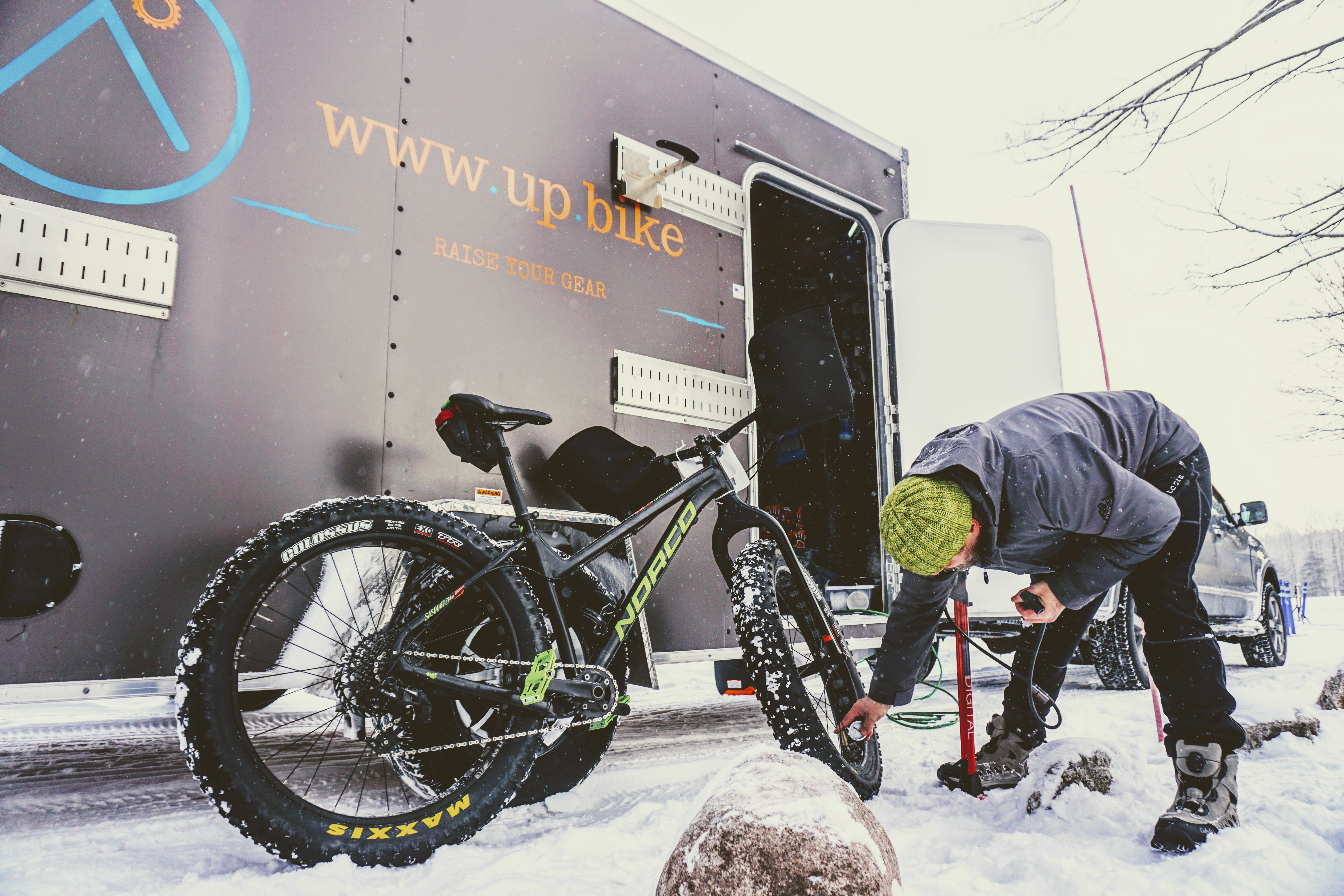 It was good to see more than a few racers read our guide to riding in the cold, because Sunday's Fat Chance Fat Bike Race was downright frigid! As the sun rose on Crystal Mountain Resort, the thermometer actually went down a few more degrees, settling at just two degrees at the race's start.

Luckily, we came prepared. The folks running the fat bike race let us pull the #AdventureHub up just about as close as you could get to the start and finish line, giving us a prime place to get prepared for a cold day in the saddle. With two heaters firing, we were able to give riders a warm place to stop, adjust their tire pressure, make the last minute tweaks we all like to make before the start, and a spot to get the feeling back in their fingers and toes!

The seventh edition of Fat Chance brought the race full circle. After experimenting with short laps, long laps, and a number of formats that included a relay, the race went back to its roots with a two-mile, circuit style race that reprises some favorite sections of singletrack reintroduced for 2019. The cold weather helped to firm up the snow and offer speeds that rivaled summer hero dirt, and groups riding together like a road crit. The men's winner, Matt Acker, averaged a flying 15 miles per hour, only taking the victory after eking out a two-up sprint with Jorden Wakeley.

While everyone had a good time, the cold conditions definitely took their toll on riders of all abilities. A half-dozen racers stopped after two laps to pull off heavy outer layers, while another half-dozen stopped to put more clothing on. Loads of racers opted for pogies or barmitts to keep their hands warm, while some resorted to adding duct tape to the toes of their winter riding boots. Goggles, scarves, balaclavas, nearly every winter clothing item you could thing of made an appearance, even if bare skin or faces rarely did.

So covered and layered were some of the riders, it was only thanks to the start list that the announcers had any idea who was who, especially those who covered their normal team liveries by an extra winter jacket.

Before, during, and after the race, the #AdventureHub served its purpose, much to the relief of the chilliest of racers. The heaters ran at full blast from start to finish, with some racers even taking a pit stop during the race to step inside and try to coax some blood flow through their frozen extremities. Afterwards, we were able to help get a few riders feeling warm enough to make a mad-dash across the Crystal Mountain Resort campus to the post-race awards and the promise of hot chili, cold beer, and a warm fireside to sit by with pals.

Fat Chance is just the first of four fat bike races in the Short's Brewing Fat Bike Series that offer a mix of events in Traverse City and Charlevoix over the next two months. With a bit of luck, we won't have to race in such cold weather, though we'll be ready if we have to!