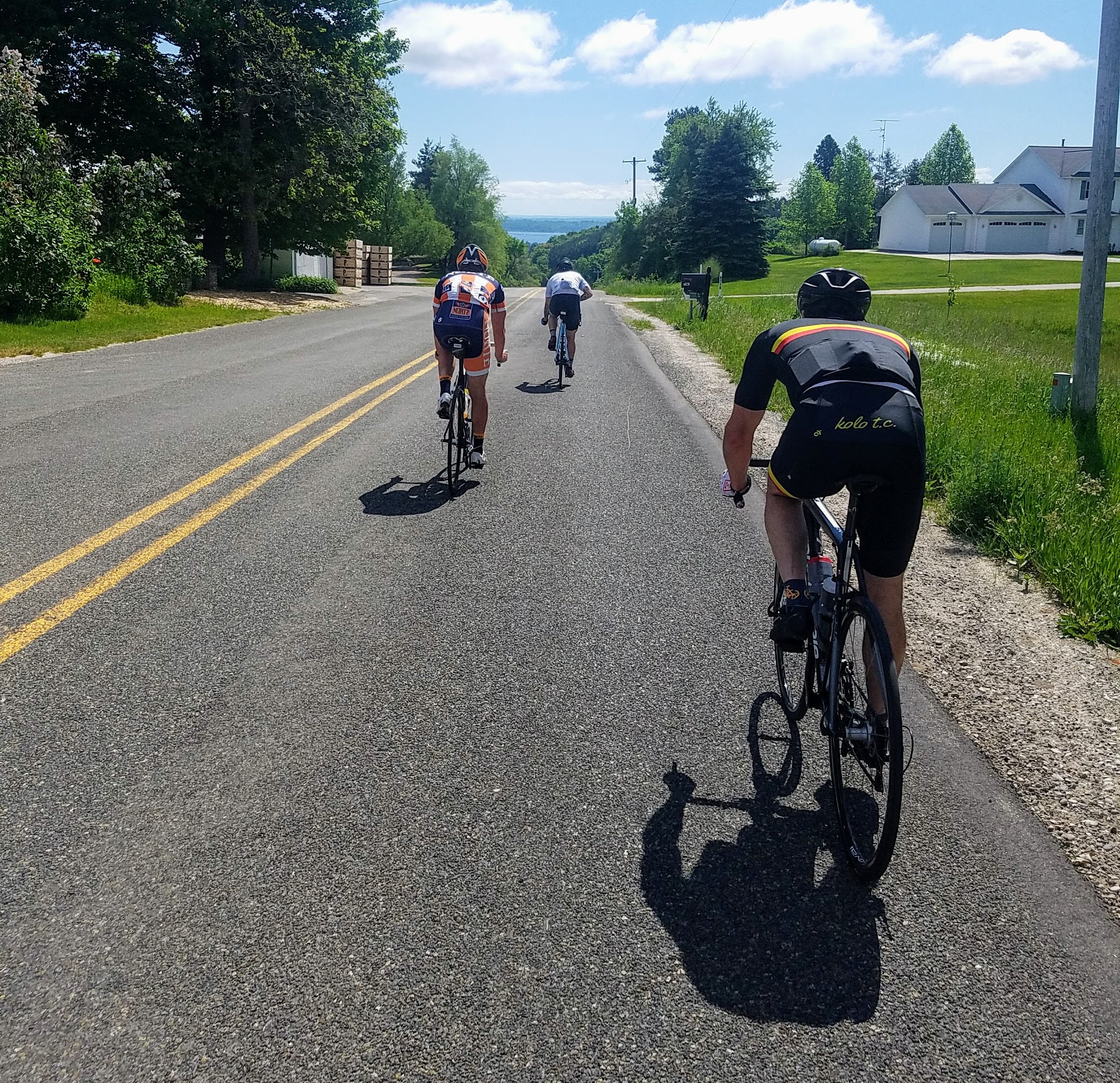 It was definitely a bit different from the Less Cancer rides we’ve hopped in for the past couple of years, but every single one is special.

For three straight years, we’ve kept a weekend in June clear for the Less Cancer Bike Ride. Most editions of the charity ride have included two days, about twenty rides, and some miles. Originally envisioned as a “Split The Mitt” adventure riding north through the center of Michigan’s lower peninsula, it’s often 250 miles of pedaling, punctuated with a picnic in Traverse City to honor cancer survivors and their families.

With the state guidelines advising riding alone or in small groups, tossing twenty guys onto a small bus and camping overnight were both very much out of the question. Instead, Less Cancer founder Bill Couzens thought of a virtual way to get everyone on their bikes to support the cause. The Alone But Together Bike Ride was born, and we started making plans for a small group to go big.

Dan, our top product designer, joined four other riders for a long day. In a lot of ways, just being with these guys was a treat. For most of us, it was our first group ride of the season, and certainly the first with warm weather, ample sunshine, and wonderful company. And with a route calling for 100 miles and nearly 6,000 feet of climbing, we had plenty of time to catch up.

If you’re going for a ride in June, there’s no place quite like Leelanau County. Even over the course of five and a half hours, we saw perhaps two dozen cars total, and most of them waiting to cross the famous Narrows bridge in the village of Lake Leelanau. In fact, rolling past the numerous farms and orchards, we almost certainly saw more cows than cars and orchards than people! Quiet, rolling hills, all made sweet with the odd cooling breeze off Lake Michigan or Lake Leelanau; you can’t beat it.

It was a morning that made us feel good about being involved in such an important cause. Each one of us has dealt with cancer through stricken friends, family, and co-workers. Even with a happy outcome, the pain, anguish, and myriad hardships of battling and surviving cancer is a trial, and the lack of closure and peace as a survivor is often tumultuous. The mission of less cancer isn’t just more survivors; it’s about reducing the number of people and families that have to face those challenges at all.

The virtual format also allowed riders from across the country to get involved, and they offered an outpouring of support. Together, we’ve raised nearly $70,000 miles for LessCancer.org, and with donations accepted through June 30, we haven’t given up on hitting $100,000. Those funds will go to educating and advocating for protection from environmental carcinogens, nutrition, and information for healthcare providers in over 40 countries around the world.

You can still get involved by donating to the cause, and by learning more about the cancer-causing issues where you are, like PFAs.

From everyone at up.bike, thanks to Bill Couzens and everyone who works so hard on the Less Cancer Bike Ride and let’s hope we see a more normal edition of the ride in 2021!